It took a while to decide on the final form factor, I wanted to consider cost and ease of mechanical construction before committing to a layout for the PCB. My original design goal was to make a completely self-contained module for a single fully isolated channel of programmable DC power and my thinking was extending to thermal management. My original idea was to rely on the module to be thermally fixed to a heat sink which could be decided upon by the builder. However, heat sinks are expensive usually and construction would depend on what heat sinks you may have to hand so I thought it would be nice to make this more flexible and use components that are easy to find and obtain for very little money. As a general rule, if you can buy something off the shelf this is always going to be cheaper than making your own, and if you can use off the shelf components that are mass-produced then all the better. I got to thinking about the heat sink I needed – force air cooled and able to handle 100 watts of dissipation in a small space that is mass produced, with a built in fan that can be controlled for quiet and efficient operation, is commonly and easily available, is of standard physical construction, good quality and cheap to buy – enter the common PC CPU Cooler, which meets all of those criteria.

So thats what I have done, I have built the PSU module into a form factor that easily accommodates the CPU cooler and still remains 100% self-contained. The built module with all required power components, mechanical construction with heat sink and cooling fan measures only 150mm wide by 80mm deep by 90mm tall. All you need to make it work is a mains transformer, four 4mm banana output jacks and something to control it via a serial interface.

I have updated the article to include the schematics which I had previously omitted. 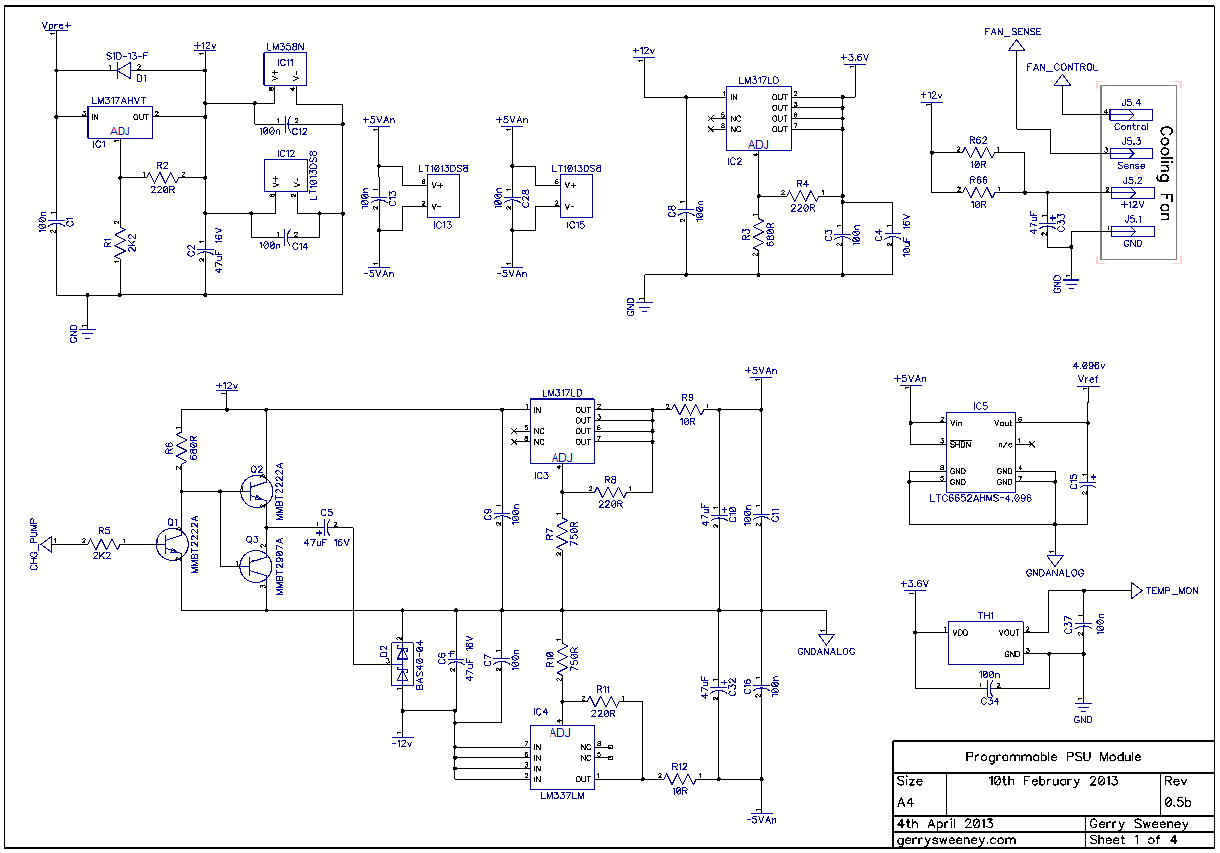 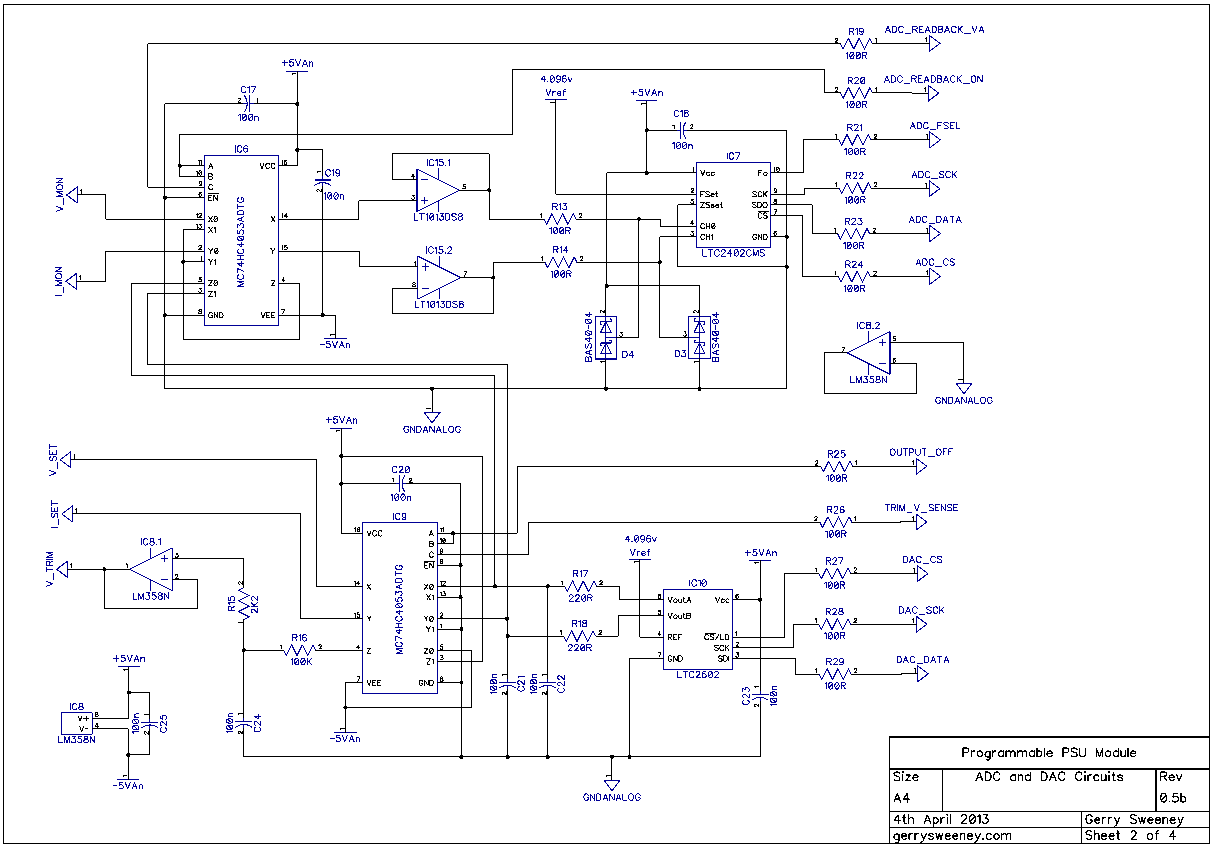 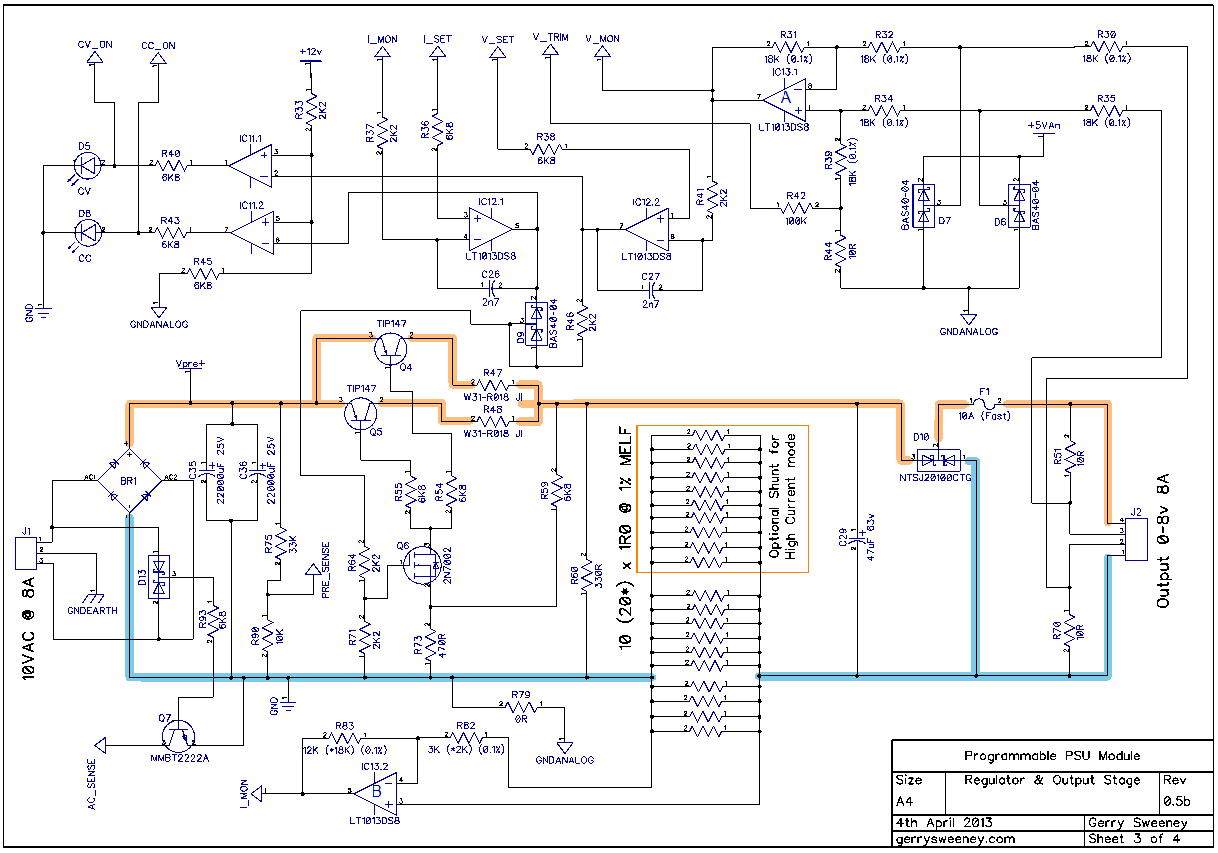 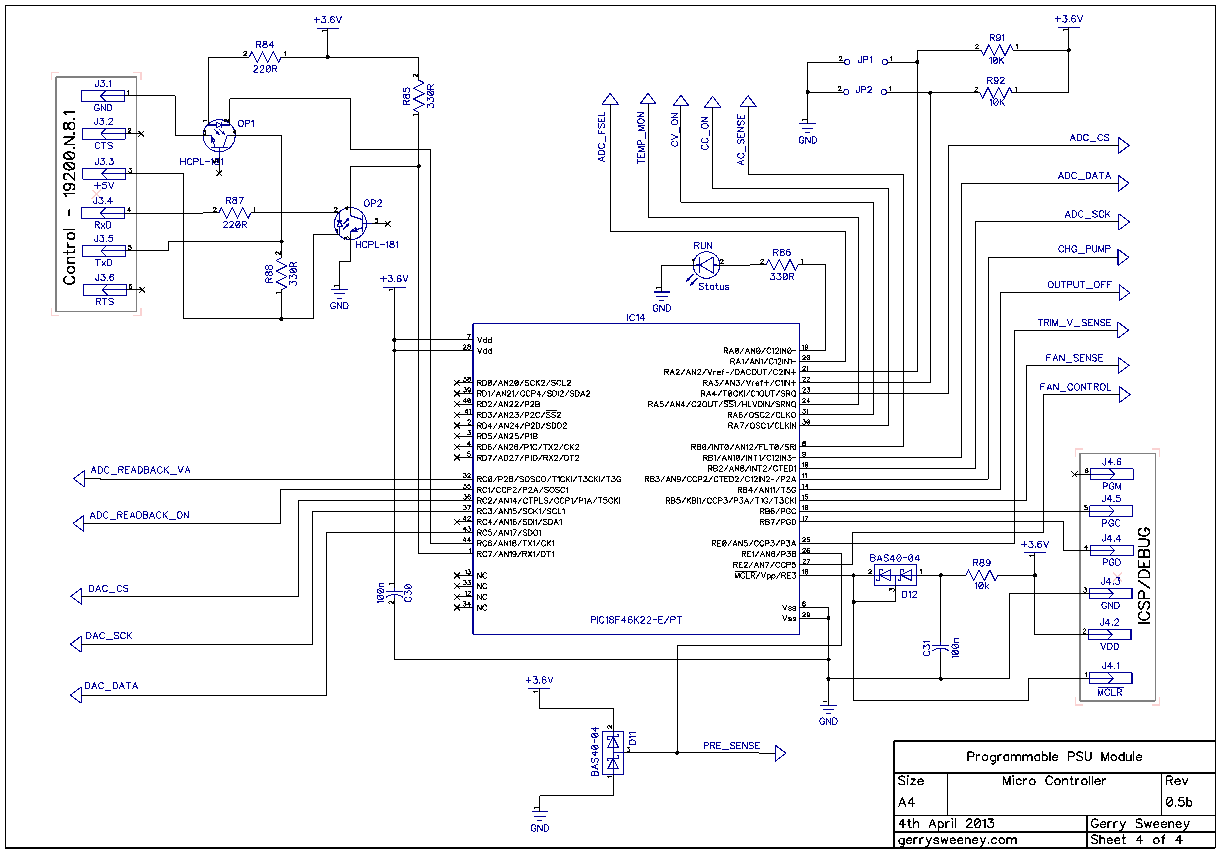 The PCB is made with 2oz Copper to handle current and provide better thermal mass. The high power path is run 5mm thick tracks (minimum) and run on both sides of the board. Where possible the top and bottom tracks are joined at the through-hole pads for the power components which is everywhere except at the current shunt resistor. For this I have many small via’s connecting the top and bottom traces to handle current and thermal bonding. 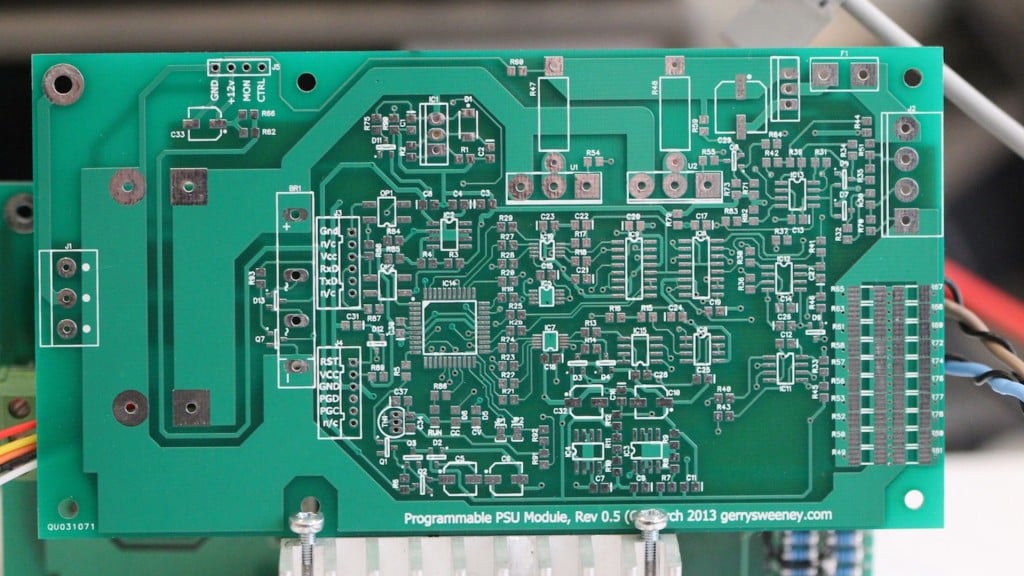 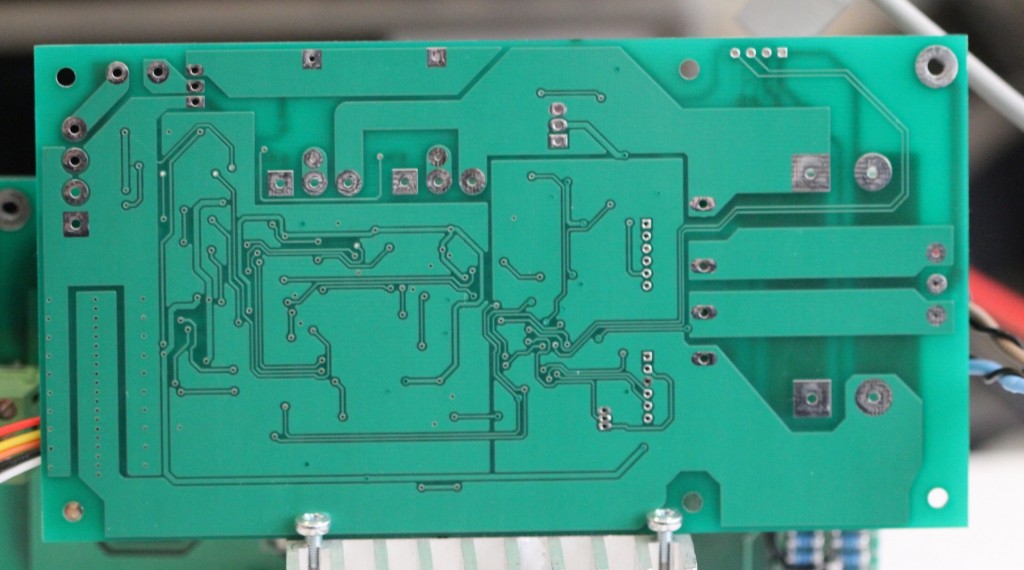 In laying out the PCB I forgot to pay attention to the star earthing I had set out in the previous post. The impedance of the ground path makes a big difference when you are looking at the lower 1mV of the range. Using DipTrace I had to use a ZERO ohm resistor to properly segregate GND and GNDANALOG nets, but I physically routed to the GND side of that resistor to the wrong point. I done a pretty similar thing on the low-side current sense connection. As a result there are two bodge wires on the board (see photo below). The first is the GNDANALOG to GND connection – Instead of installing R79 (which is ZERO ohm) I have taken a wire from the bottom pad down to the low-side of the current sense resistor array. The second is slightly more difficult to do, I had to cut the track from the top pad of R82 and then again take a wire down to the low-side of the current shunt resistor. 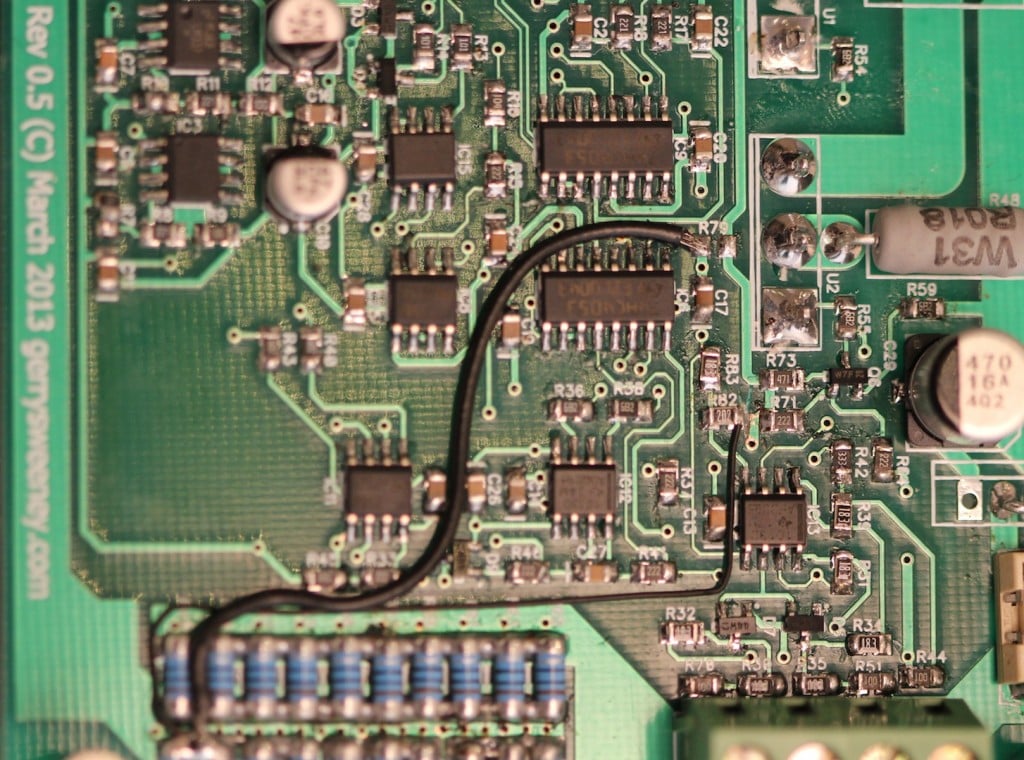 In order to manage the thermal properties of the module, the firmware simply uses the temperature measurement of the heat sink to set the fan speed calculated on the following basis: –

Controlling a 4-wire fan is pretty easy, the specification developed by Intel describes the electrical interface and requirements for both fan control as well as fan manufacturers. I have added the Intel 4-Wire PWM Controlled Fan Spec as a download on this page for convenience. The fan I tested and used in the video above runs at about 1500 RPM to 3400 RPM with a 0-100% duty cycle on the PWM control signal. The taco output is open collector and provides 2 pulses per revolution.

Next time I am going to *try to* characterize the PSU. I don’t have much experience doing this which is why I say I am going to *try* – none the less I should be able to pull together some basic specs and test conditions.

Following that, I am going to design and make a front panel controller for the PSU. Although I am making this specifically for this project I am thinking about making this more generic so it can be used in other systems and/or test equipment. The basic goal is to create a single PCB front panel with a 4×20 VFD display, some buttons and controls, a micro controller (PIC32 or maybe ARM) with RS232, USB, Ethernet (and possibly a GPIB interface module) with 3-4 independent TTL level internal serial interface channels (to connect to PSU modules for example). Don’t know, all just thoughts at the moment, we shall see…